This quick and simple cross-stitch pattern uses the striking gingham pattern in beautiful reds. I think it would make an ideal gift for a loved one on Valentine's Day.

Use a basic frame to turn it into a reminder of your love, or use this pattern with waste canvas and embellish a piece of clothing or gift bag with it for a cute and affordable gift! Complete the set of three designs (see the other patterns below) for a stunning display that can be used to decorate your home every February.

Gingham is mostly a lightweight to medium-weight cotton cloth that's woven in a very distinct pattern. The stripes go both horizontally and vertically, creating a checked design. The first gingham fabric had stripes only going one way, though, and this type was available until the late Victorian period.

Gingham is most commonly made using two colours: white and a bright colour. The most common colours in gingham are the primary colours: red, blue and yellow. However, this design can be made with any colour.

How the Design Is Made

The design is created as the threads in both directions meet, creating various shades.

Since its invention, gingham has remained a popular fabric, mostly because it's affordable and is associated with summer. However, its use in popular culture has helped keep gingham in high demand.

A Brief History of Gingham

Gingham is often associated with the dresses worn by southern belles in America, so I was surprised to learn that the famous checked gingham pattern was actually created in Manchester, England, during the mid 1700s.

It was originally composed of plain stripes, but a factory in England decided to play with an idea and created stripes going both horizontal and vertical, resulting in this instantly recognisable design that has remained popular today. The actual word 'gingham' originates from the Malay word for striped, 'genggang'.

Uses of the Pattern

Gingham is most widely used for casual dresses and shirts, and it has never really been seen as suitable for formal wear due to its low cost. You'll see gingham mostly in the summer, as the traditional fabric is lightweight and brightly coloured. It also has no right or wrong side, so it is ideal for reversible items.

Other popular uses for gingham include the linings of picnic baskets and outdoor table cloths, again because of its association with warmer weather. This led to gingham having the nickname 'tablecloth pattern'.

This design is the second in a set of three cross-stitch hearts for Valentine's Day. Make them and explore various styles!

Feel free to share the link to this pattern, but please do not replicate it or sell it in any way. 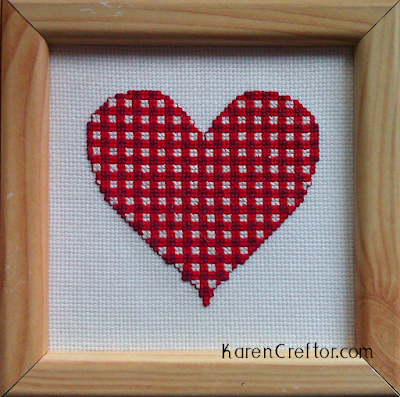